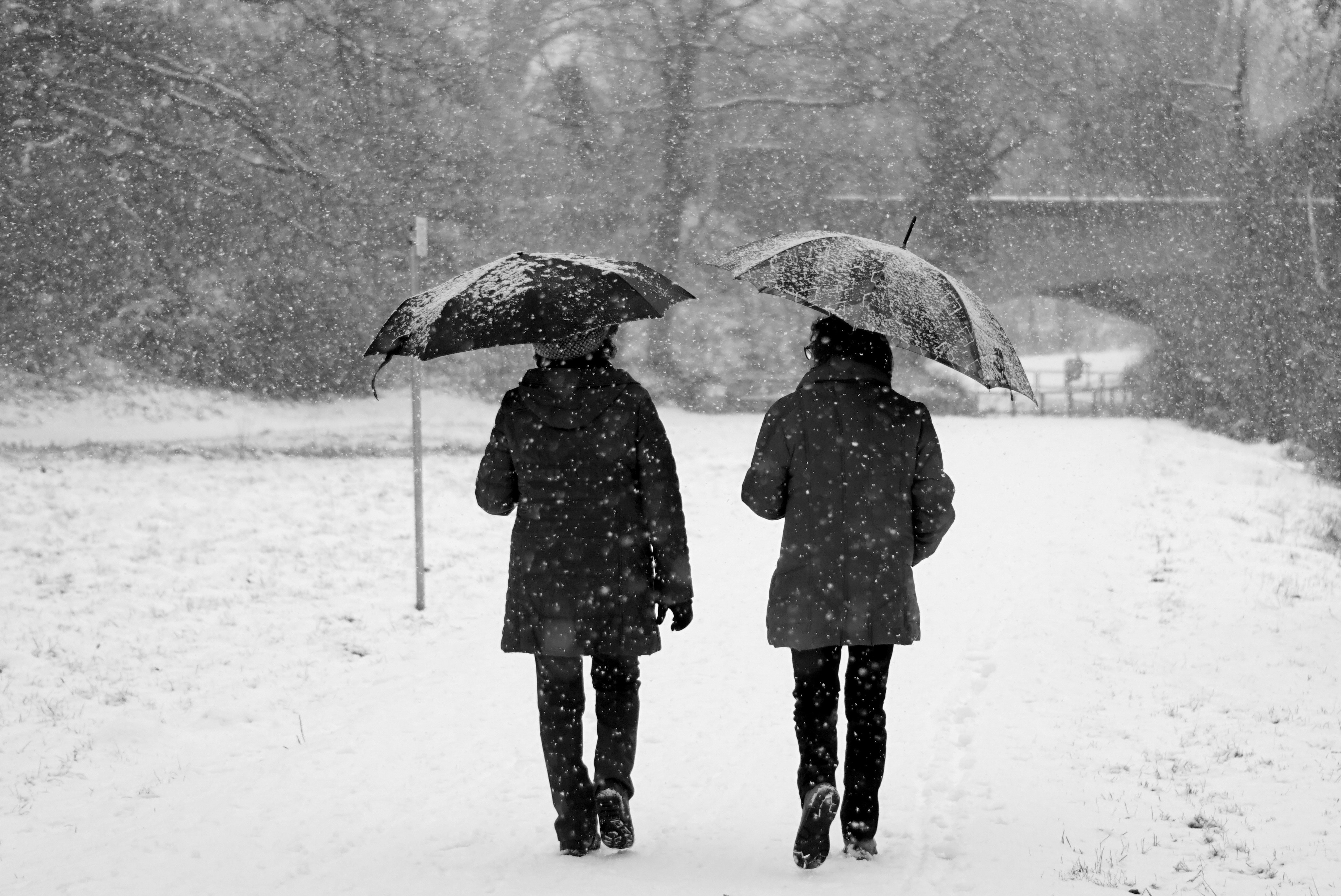 “All you must do is walk!” I get that a lot. And, it’s understandable. I just finished Week 24 of this 20k One Year Step Challenge. The challenge is to get at least 20,000 steps a day for a full year with no breaks. That’s a lot of steps which probably feels like I don’t do anything else. Except I do. I even have a full-time job.

And, that job delivered one it’s perks this week.

I’m part of a morning radio team. This is what I’ve done most of my adult life. It’s what I wanted to do when I was a kid and I’m still doing it many decades later. How cool is that?

That perk is occasionally I get to interact with well-known people. And, this week we had an in-studio visit from Danny Gokey. He’s one of the most popular singers right now in our format…Contemporary Christian Music. 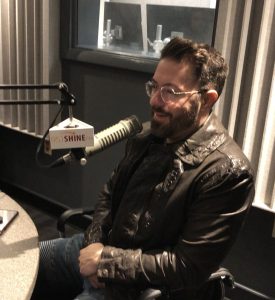 Danny got his start on American Idol during Season 8. You may remember that Danny was the contestant who auditioned just four weeks after his wife’s death. Danny finished third that season behind Kris Allen and Adam Lambert.

Last week I got to meet Danny who spent an hour with us on the morning show. It came right in the middle of another week of getting 20,000 steps a day. And, since you’re probably tired of reading about how I do that while it’s still winter, I thought I’d change it up for one week.

Meeting Danny got me thinking about other well-known people I’ve met while doing my job.

In the late 50’s there were few bigger stars than Charlton Heston. He was Moses in The Ten Commandments. Even won the Oscar for Best Actor. By the 90’s his star had dimmed, but he was still quite famous. That’s when I met him. Sort of. 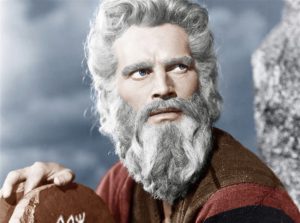 I was at a conference doing interviews for my radio program. These were mostly writers and singers our audience would be familiar with. I was in a large room with about a dozen other media outlets.

I was looking at my notes waiting for my next guest to arrive when I heard the voice of Moses, “May I sit down here?” I looked up and there was Charlton Heston motioning to an empty seat at our table. I said yes. He was a scheduled guest at the table next to mine and they were in the middle of another interview. I still have no idea why he was at this conference, but who cares.

There we sat…me and Moses…for several minutes. I wish I could tell you a compelling story of the witty back and forth we had, but no. He was a big star who didn’t really look like he wanted to talk. So, I sat there, quietly, until he got up and said thank you.

Before Ben Carson ran for president he was a rock-star pediatric neurosurgeon. His fame exploded in the late 80’s after he successfully separated siamese twins joined at the head.

In 1996 Dr. Carson wrote his second book, Think Big. Since he worked at Johns Hopkins in Baltimore, I was asked by his publisher to do a promotional interview. I quickly agreed and coordinated with his assistant for a sliver of time in his demanding schedule.

The really fun part is we did the interview in his office. I was surprised by how modest it was. No windows with a grand view, no fancy furniture…just a desk, a couple chairs and LOTS of books.

For a short while early in the 2016 presidential campaign, Dr. Carson was on top of the polls. I thought how cool it would be if he won. I could say I interviewed a president  in his office. I no longer had a copy of that conversation, bit I still had the memory.

Dr. Carson didn’t win, but ironically I recently found the tape. I listened. I was young and nervous. Dr. Carson was calm and gracious. I should have stuck with just the memory.

Joni is probably not well known outside of Christian circles, but she should be. At 17 Joni broke her neck diving into the Chesapeake Bay. She has spent the rest of her life in a wheelchair as a quadriplegic.

Her story is remarkable. She became an artist…learning how to paint holding the brush between her teeth. She wrote a book that became a best seller. That was followed by more books and even more opportunities to tell her story. Perhaps her greatest legacy is the organization, Joni and Friends, which has helped thousands of people with disabilities and their families.

Joni is from Baltimore, but long ago moved to California. Because of her local connections, I’ve had several opportunities for interviews. But, my favorite happened in Dallas.

I was at another of these conferences. It had been a long day with several no-show guests. I was pretty discouraged and was wondering why I was even there. At that moment…and I do mean at THAT moment…Joni rolled up in her wheelchair.

At this conference, Joni was a rockstar. Everybody knew who she was and her time was pretty well taken. I did not have anything scheduled with her, but I asked if she had a couple minutes to answer a few questions. Joni agreed and gave me the best interview of the conference and helped my deep discouragement disappear.

I’m still grateful for that encounter.

I love sports, but I have never enjoyed interviewing athletes. They tend to answer in cliches and I find that boring. But, I did get one interesting moment with future Hall of Fame linebacker Ray Lewis.

It was January 2013. The Ravens were in the playoffs and Ray had just played his final game ever in Baltimore. When the game ended Ray jogged around the perimeter of the field to thank the fans. He was wearing a shirt with “Psalms 91” printed on the front.

A couple days later, during a media opportunity at the Ravens practice facility, I asked Ray about the shirt. I could tell he liked the question. It was different from the normal stuff he gets asked so he gave me a longer answer than usual. 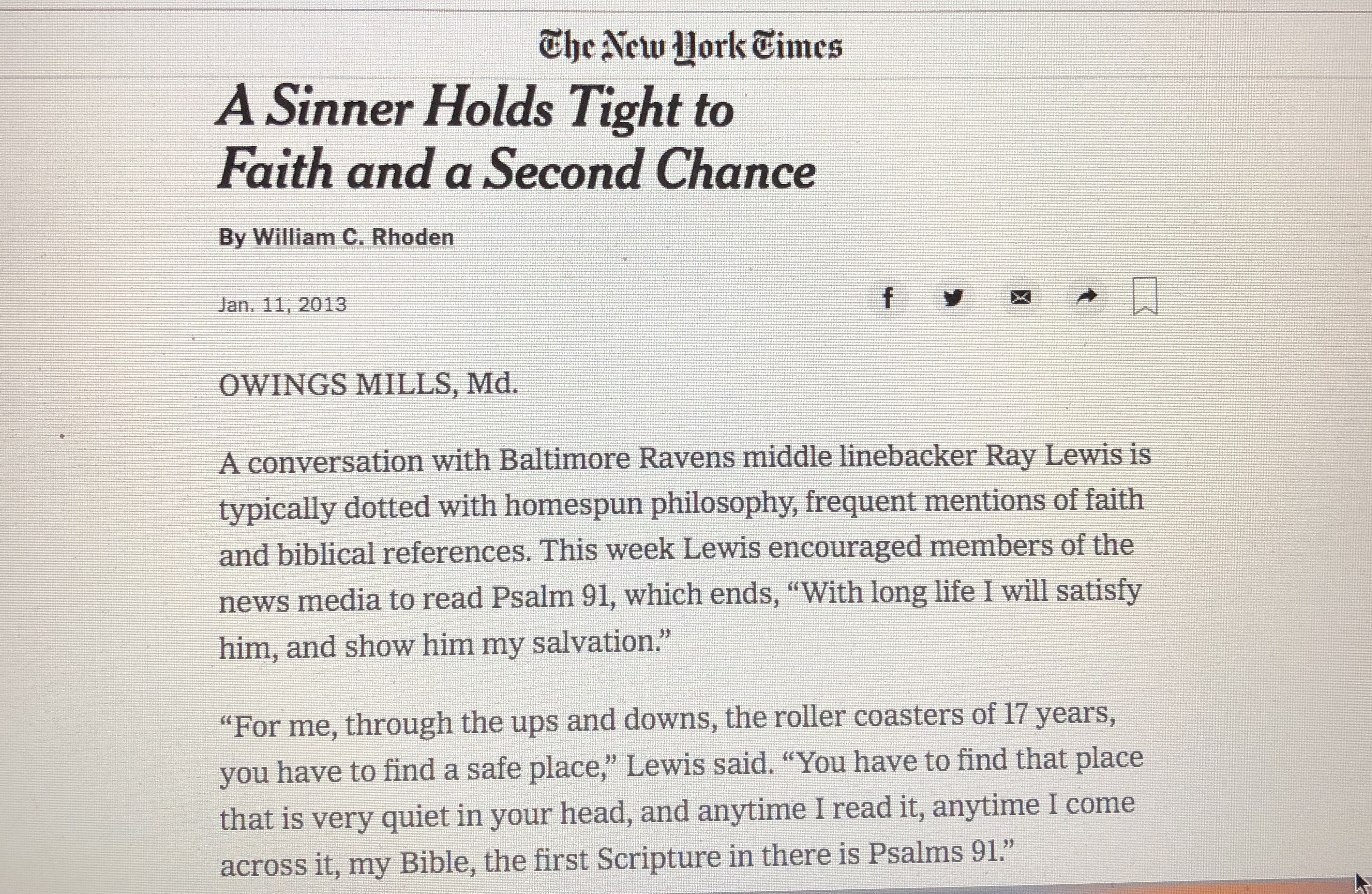 A couple weeks later I was reading the New York Times. The Ravens were headed to the Super Bowl and there was an article about Ray. It started with his answer to my question. I thought that was pretty cool.

There were 12 men who walked on the moon. Buzz was #2. He also has the best astronaut name ever. In 2010, Buzz competed on Dancing With the Stars. To promote the show, he was made available for some radio interviews. I applied and was one of those selected.

Neil Armstrong and Buzz Aldrin went to the moon when I was nine. Since then, I have devoured everything I can about the Apollo 11 mission. And, now to have the opportunity to talk with Buzz was a thrill.

Whenever I do interviews with well-known people I always try to find at least a couple questions they don’t often get asked. Part of that is my ego, but part is also for their benefit. How many times can you answer the question, “What is it like to walk on the moon?”

After Neil and Buzz landed on the lunar surface, and made sure everything was safe for them to stay, Buzz did something unique. He took communion. He’s talked about that before, so why he did it was not a unique question. But, I did think of an angle I’d never heard him mention.

As Buzz was taking communion in the lunar module, Neil Armstrong was only a few feet away.

It’s no secret that Neil and Buzz weren’t best friends. Their personalities were very different. You get a glimpse of that awkward dynamic in the recent movie, “First Man”.

I suspect Neil was not a fan of what Buzz was doing. It wasn’t mission focused and that’s what mattered most to Neil Armstrong. So, I asked Buzz,”What did Neil do while you were taking communion?”

There was a pause, and then Buzz told me that Neil simply remained quiet. Not exactly an earth shattering revelation, but at least I got to ask. 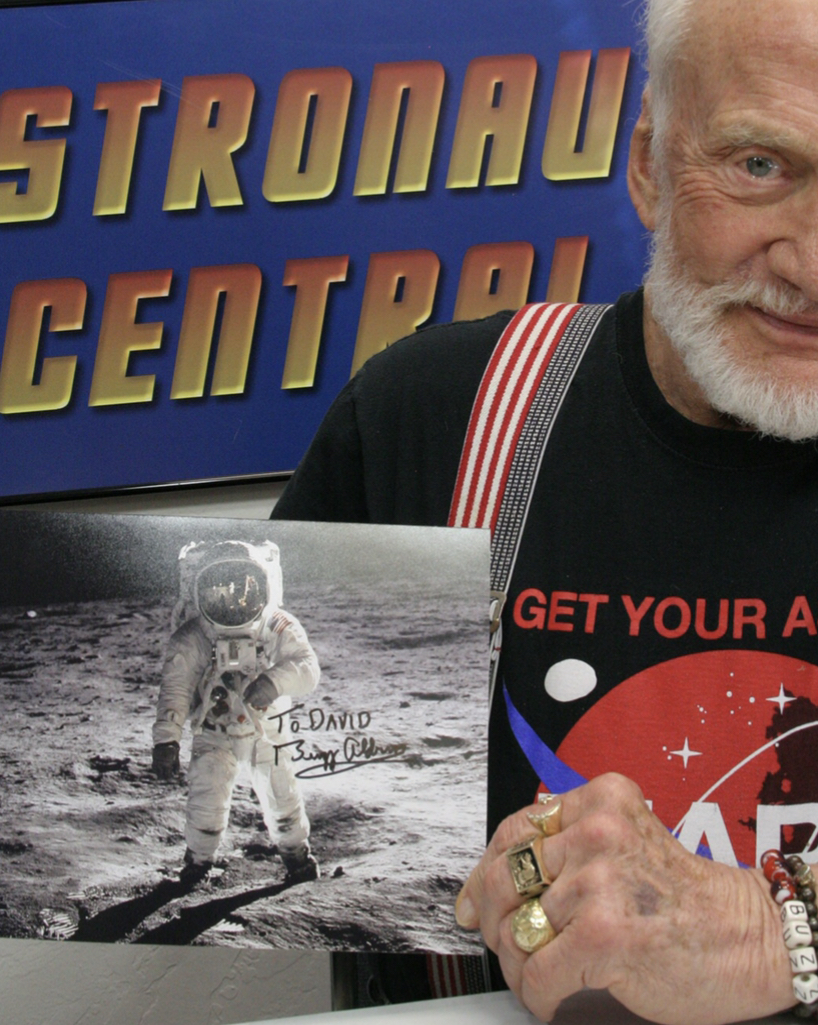 Six years later, Buzz signed a picture for me. He was 3,000 miles away when he did…and I paid for it, but it hangs in my office and reminds me of the time I got to talk with the Second Man on the Moon.

And, then there’s this.

Much like the interview with Buzz, the former president was doing some telephone interviews to promote a book he had written. I jumped at the chance and was given a slot.

President Carter’s book was titled, “Living Faith”. I only had ten minutes and wanted to make it count. I knew I wasn’t going to find a question he’d never been asked so I didn’t try. Instead, I came up with questions that interested me.

One of those questions I already knew the answer to. But, I thought I’d ask anyhow. I wanted to know if he had ever shared his faith with another world leader while he was president. I knew the answer would be no because that’s not what presidents do.

The day of the interview arrived. I was pretty excited. This is the kind of thing your children tell your grandchildren about. I was in the studio early in case the former president was running ahead of schedule. That’s the kind of thing Jimmy Carter tends to do. After waiting 10 minutes the call finally arrived. The producer on the other end asked for me and then said, “Please hold for President Carter.” A moment later a very familiar voice said hello.

President Carter was friendly and engaged. I don’t remember my other questions, but I do remember the one I was most interested in. The one I was sure the answer would be a quick no.

Jimmy Carter, much to my surprise, told me the story of a time he did share his faith with another world leader while he was president. He didn’t tell me how this leader responded, but I didn’t need to know. I was amazed that it had even happened.

These encounters don’t happen every day in my job. For me, the everyday stuff is weather, traffic and news. But every now and then I get to enjoy one of these rare moments. And when they happen…I stop walking enough to soak it all in.

Do you want to Win at Fitness? It’s not easy, but it is possible! Goal 20,000 Steps can help with articles that will inspire and guide you to success. . If you click the FOLLOW button (below on your phone…to the right and above if you’re on a computer) you’ll each article that sent right to you the moment it is published.

You really can Win at Fitness! We’ll help you get there One Step at a Time.