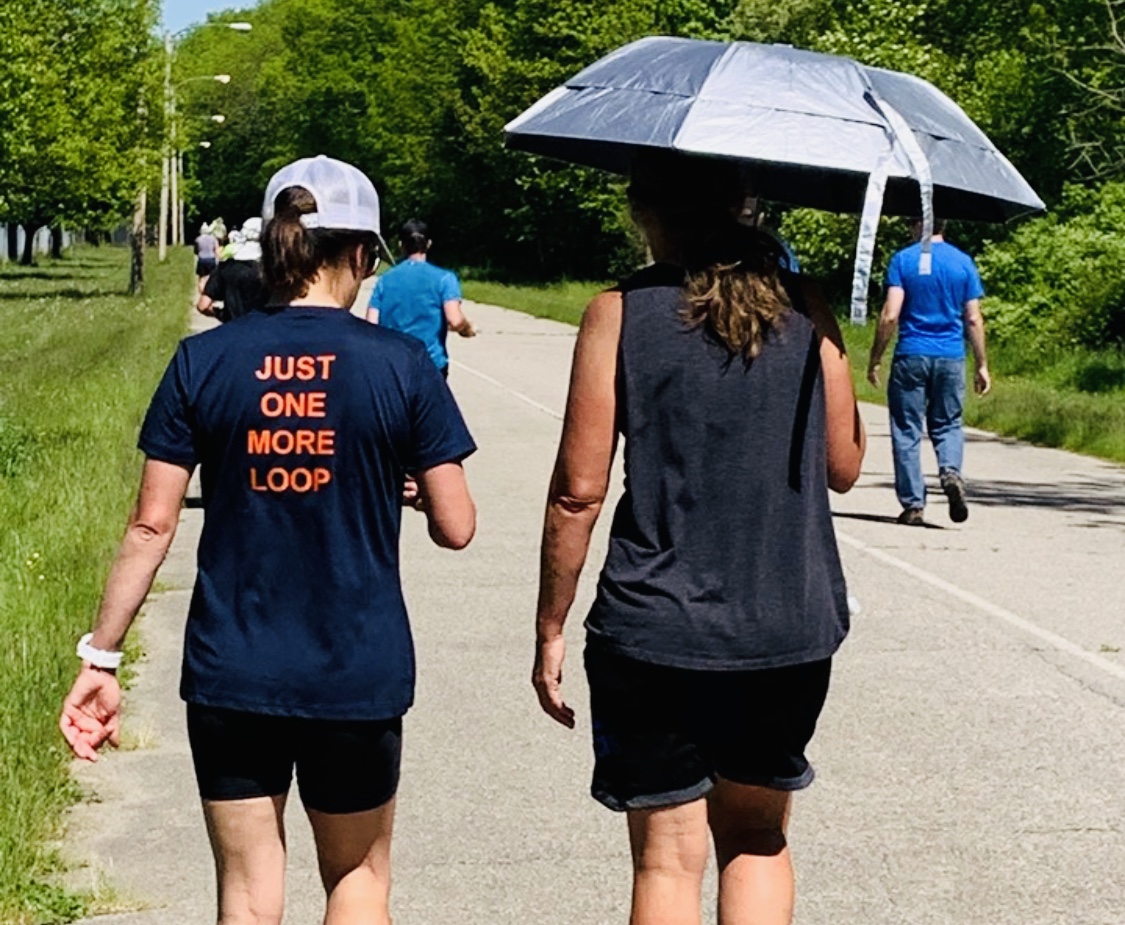 The text arrived at 6:55p. It simply read, “Feeling nauseous. Prayers appreciated. Taking a break.” And, then nothing for the next hour. The text was from my wife who was running an ultra-marathon four hours from home. At first I felt discouraged for her. Then I grew concerned as she was not responding to my texts.

Ava loves to run. She has done many 5k’s, half-marathons, and even marathons. This was her first ultra-marathon. That’s for people who want to run MORE than 26.2 miles. This ultra was a timed event at a fairgrounds in New Jersey called Three Days at The Fair. Participants register for a specific amount of time anywhere from 12 hours up to 10 days. The course is exactly one mile and you run that as many times as you want, or can, for the amount of time you signed up for.

Ava chose 24 hours and her goal was 50 miles. At least that was the goal when she registered last year. But, stuff happened between then and now that altered her goal.

First, she was diagnosed with breast cancer last fall. Thankfully, it was caught early. Ava needed surgery and then four weeks of radiation. Even though one of the side effects of radiation is a bone numbing fatigue Ava kept running. She had her first ultra to train for, after all.

Once the radiation fog lifted in early February Ava was thrust into another difficult situation. Her mom needed to be moved into assisted living. Ava did much of the heavy lifting for that…literally and figuratively. But, she kept running. She had her first ultra to train for, after all.

And, there was the persistent discomfort in her knee. It didn’t hurt as much as let Ava know something wasn’t right. This is the same knee that sustained a fracture four years ago that sidelined Ava for almost six months. She did not want to relive that experience, but she kept running. She had her first ultra to train for, after all.

After months of planning, training, and dreaming, the event had finally arrived. The weather looked to be decent. It was projected to be sunny and warm. Maybe a little warner than you’d want when you’re running 50 miles, but she’s handled worse. Oh…and the goal had changed too. Instead of 50 miles, Ava decided to go for 55 since that’s the big number on her birthday cake this year. Yeah…55 is a good goal. Except…wait…how about a 100k instead. That’s even better. Ava decided that would be her “best case scenario” if she feels good. 100k is 62 miles.

Ava started running at 9a. I got two updates by text. The first included a couple pictures with the caption, “It’s a hot one”.

The second was sent when she reached 17 miles. That was the last one I got before the “I’m nauseous…please pray” text. She told me she was taking a break and then I got nothing from her for more than an hour even though I sent three asking how she was doing.

When her stomach started acting up, Ava had run 37 miles. I was discouraged for her because that was far short of her first goal. I didn’t see how she could do another 13 miles with an upset stomach. And, because she wasn’t responding, I was concerned it was more than just discomfort.

Finally, I got an update. She made herself throw up and still felt crappy, but she was running again. Actually, at this point it was more walking than running. Ava was back at it…and she kept going. She reached 50 miles…then 55…then 100k…then…

Ava kept going when it was really hard because she has developed three things that give her the ability to keep going when so many others would give up.

The Power of Passion

Ava trained for this race through the fatigue of radiation which coincided with the coldest months of winter. Some of her longer runs happened in the pouring rain with temperatures hovering around 40.

Who does that? Someone with passion, that’s who.

Passion is not simply emotion that’s a little deeper. Passion is a desire that is anchored in your heart combined ambition that fuels action. Ava could not NOT run. That’s the power of passion. You don’t have to talk yourself into doing something.

Passion does not just happen. It develops over time. You find something you enjoy. You get better at it. You see results. You enjoy it even more…you get even better…and the results increase. Passion is a flywheel that picks up speed.

And, then when roadblocks get in your way you don’t stop. Passion compels you to find a way around them. I saw that during Ava’s training for the ultra-marathon and then again during the race itself. An unhappy stomach was not going to stop Ava.

The Power of a Goal

Ava’s goal to run 50 miles in 24 hours gave her passion a focus. That’s what goals do…they take light and give it a laser-like focus.

Once she decided on her ultra-marathon goal, Ava was free to focus on getting ready. She researched and found a training program that gave her the best chance of success. Her training required a specific number of runs each week and how long each of those runs would be.

As much as Ava loves running, she couldn’t simply head outside and run because she loved it hoping that would get her ready for the race. It had to be focused. Passion alone wasn’t enough. She needed a goal and she had that. Even though the goal changed as she got closer to the race, her passion was still focused on a specific target.

That focus lasted through her training into the race itself. Ava had a specific race day plan. She had to pace herself so she could reach 62 miles. That goal allowed her to focus her passion so she could taste success.

The Power of Commitment

I’ve often thought about commitment as having the ability and strength to not choose giving up. I’m not so sure anymore. When Ava signed up for the race I knew she would reach whatever goal she set. The only thing that would prevent her from doing that was an injury that kept her off the course. I knew Ava would get at least 50 miles because not reaching that goal was not even an option for her.

In other words, people who are committed don’t keep choosing between moving forward or stopping. There is no choice. The only option they see is to keep going. Who else runs when the fatigue of radiation screams at you to stop! Someone who doesn’t even think that’s an option, that’s who.

And, so Ava kept going past 50 miles…then 55…then 62. At this point it’s the middle of the night. Ava’s 24 hours went from 9a Saturday till 9a Sunday. Finally around 6a she stopped to sleep. She was at 71 miles.

But, Ava wasn’t done yet. She got up from her nap and still had time on the clock so she started again and didn’t stop until she had reached… 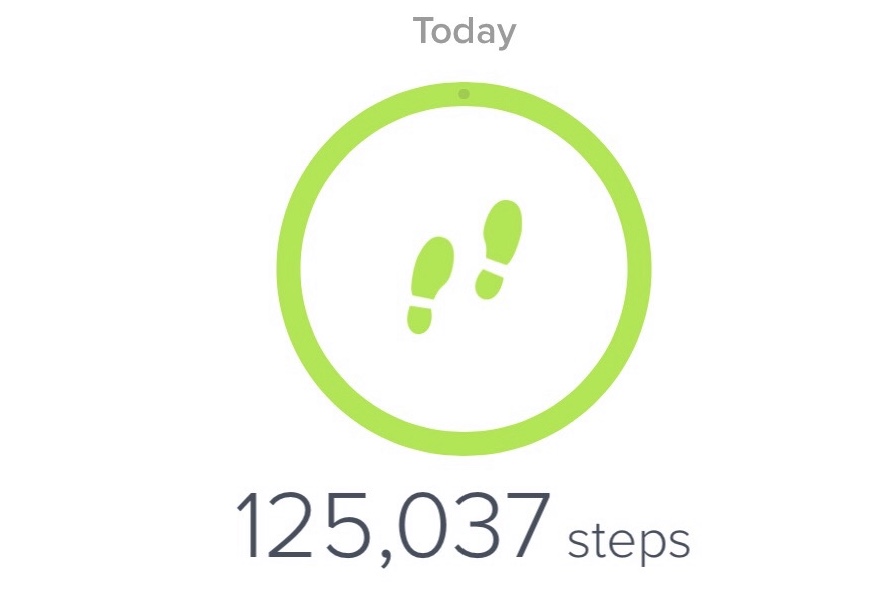 Oh…one more thing. When Ava reached her goal of 100k (62 miles) there was no one at the finish line to celebrate with her. I was four hours away asleep. Her running friends there were either off the course napping or somewhere else on the one-mile track. She reached her BIG GOAL alone.

She told me this while we were walking a few days later. She said that, “Hurt a little,” but then looked at me with a smile and said…

If you struggle with motivation to stick with fitness this blog will help. Don’t be intimated by the title. That’s my goal…not yours. But, my bigger goal is to help you start a fitness journey that doesn’t stop and builds momentum. If you click FOLLOW (below on your phone and to the right and above on your computer) you’ll get an email with a link to each motivating article the moment it’s published.